The train to Manchester takes approximately fifteen minutes and the cost is £2.50 for a 1 way ticket.

Three bus services, operated by GMPTE, Skyline and National Express, operate between the airport and city. A bus takes half an hour.

There is a taxi rank outside each terminal exit. A taxi to Manchester will take about twenty minutes costing around 20 pounds.

Manchester Airport is a major airport located at Ringway within the city of Manchester and is the busiest airport in the UK outside of the London region when it comes to passenger numbers.

It provides non-stop scheduled flights to destinations all over the world. In 2009, Manchester Airport handled over 18.5 million passengers with one hundred and seventy thousand plus flights, making it the 4th busiest airport within the United Kingdom in passenger numbers and 3rd in terms of total flights. 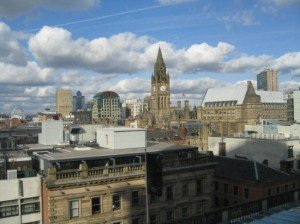 You can easily compare car rental Manchester quotes side by side. It makes finding a great value Manchester car hire deal simple.

You can choose from numerous UK car hire locations for pickup.

What to do in Manchester

The British town of Manchester is instantaneously synonymous with football and music although there’s a lot more to Manchester than meets the eye.

A staggering array of fine art galleries, music venues and museums pave the way for a town rich in cultural heritage.

It would be foolish to ignore Manchester’s link to football with two well respected clubs based in the town. Old Trafford is home to Manchester United and is a haven for fans.

It’s a place where they are able to immerse themselves in the culture and background of one of Britain’s most well-known football clubs by touring the stadium and going to the museum.

This state-of-the-art venue played host to the UEFA Cup final in 2008, played between Zenit St.Petersburg of Russia and Rangers of Scotland.

Sporting enthusiasts will also enjoy Manchester Velodrome, Britain’s only indoor Olympic cycle track which is open to cyclists of all abilities.

Manchester is equally well recognised for its  links to the music industry which is celebrated via the various musical events and festivals held each year.

Music lovers may be interested in Bridgewater Hall, Manchester’s international concert venue which was opened by the Queen of England in 1996.

Fine art lovers will really feel at home in Manchester due to the plethora of first-rate galleries and exhibition venues delivering everything from the old masters to contemporary moguls.

The architecturally bemusing Urbis is an exhibition centre for city life which showcases contemporary fine art and style.

Should you prefer the old Masters style, head to Manchester Art Gallery. It is housed in an amazing neo-classical creation.

One of the most well-known Mancunian artists is L.S Lowry whose works are exhibited in the Lowry gallery in Salford Quays, which is one of the Britain’s forefront arts venues.

Heaton Hall is one more unique space. It is a restored eighteenth century house nestled among six hundred and fifty acres of green parkland.

Manchester’s museums are equally varied. Have a peek at the past at the award-winning Museum of Science.

Manchester University museum is one more prime attraction which houses over 6 million specimens and objects, such as the cast of Stan which is a fossilized Tyrannosaurus Rex.

Save Money with Cheap Car Hire in Manchester