Bournemouth Airport is located six and a half kms northeast of Bournemouth in south England.

In 2007, over one million people used the airport however that number has since dropped with 670,000 people using the airport in 2018.

Bournemouth Airport is among several airports claiming to be the fastest growing within the United Kingdom with a new terminal unveiled in June 2010.

There’s no rail connection but there’s an hourly shuttle bus service which offers a direct link. The service runs each and every hour from 7am to 7pm seven days a week.

You can also get a taxi from outside the arrivals hall.

Take a look at some of our excellent car rental Bournemouth Airport offers. We compare rates from the best UK car hire firms.

Bournemouth is well-known for its seven miles of golden sandy beaches and clean seas. The Pier is nearly in the middle of the beach and offers a small fair, boat trips, an arcade and some other shops.

The Russell-Cotes Art Gallery and Museum is located on the East cliff. This museum and gallery has some fantastic collections of nineteenth century fine art and Japanese artifacts.

The interior of the museum alone is worth seeing simply because its lavishly decorated and shows the Victorian interests in eccentric form along with other cultures, particularly Japan and China and best of all admission is free. 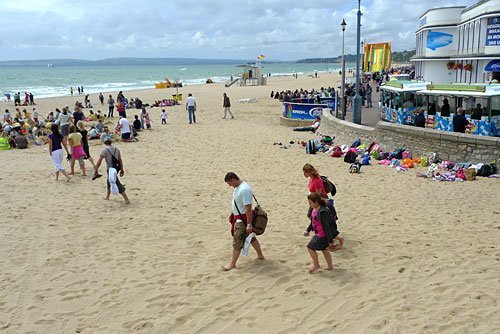 The famous author Mary Shelly who wrote Frankenstein is buried within the churchyard of St.Peter’s Church along with the heart of her husband the Romantic poet, Percy Bysshe Shelly.

Bournemouth has many different restaurants suiting various tastes and budgets. Most can be found in and around the town centre as well as in the Charminster and Boscombe regions.

The number of takeaways in Bournemouth has also elevated over the years, supplying a low-cost alternative to a restaurant meal.

At night the town comes alive with a vibrant bar and club scene. It is one of Britain’s most popular clubbing areas, with many stag and hen parties held in Bournemouth.

You will find over fifty nightclub venues that are open each and every day of the week. On busy club nights, roughly forty thousand people are out in Bournemouth.

The Triangle region in Bournemouth is where the gay community is concentrated with several gay friendly clubs and pubs.

Most night clubs are situated in and around the town centre with the exception of the Opera House in Boscombe. Traditional pubs are at a premium in the centre, with the emphasis much more on trendy bars.

Bournemouth FC currently play in the premier league which means the arrival of many of the UK’s biggest football clubs to the city.

Search for a quote and see just how cheap our Bournemouth Airport car hire prices can be.