A value for money car rental Knock Airport deal can be arranged in just minutes. Knock is a little village in East Mayo mid-way between Galway and Sligo, and nearly the same distance away from Kiltimagh, Ballyhaunis and Claremorris. Best known for its religious associations, especially the Marian Shrine and Basilica, the village also boasts a fine museum, the Knock Folk Museum which documents the story of the Knock Apparition of 1879 and places it in the context of life at that time. Knock International Airport is located about ten miles away on the Charlestown road. The story of the airport and its charismatic founder, Monseigneur James Horan are well documented in the area.

The name Knock comes from the Irish word cnoc which translates into English as hill. Knock is really a well-appointed and tidy town, able to cope with the normal influxes of large crowds of pilgrims and visitors. It is actually Ireland’s most visited town every year with over 1.5 million pilgrims visiting. There are a number of good hotels, B&B’s too as well as a choice of pubs, restaurants and shops. It is home to the famous Knock Shrine where on the 21st of August 1879, there was an apparition of Our Lady, St. John the Evangelist and St. Joseph. They appeared at the south gable of Knock Parish Church and were witnessed by 15 people, young and old. Knock is now an internationally recognised Marian Shrine and was visited by Pope John Paul II in 1979, commemorating the centenary of the Apparition. Mother Teresa of Calcutta visited the Shrine in June of 1993. 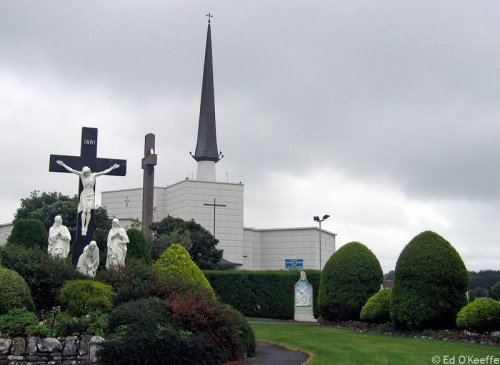 Hirea car at Knock Airport and discover all the surrounding areas in Mayo and further afield. Knock Airport was opened in Knock as an international gateway for travelers to Ireland and has elevated the status of Knock to a main tourist destination.The simplest way of getting to Knock from inside Ireland is by car, alternatively you are able to travel by Bus. Unfortunately there’s no direct route to Knock all connections are created by way of Charlestown. The nearest train station is Ballyhaunis, twenty two Km away. County Mayo is situated on the west coast of Ireland and is the second biggest county in Ireland and is frequently overlooked by tourists. While it might not have the dramatic scenery of Kerry, or the fame of Connemara or the Burren, it’s got a special charm and possibly one of the greatest reasons to come here is that few other people do.