Inside and outside Amsterdam Airport Terminals, you will find seven car hire Schiphol Airport firms in all. As with many travel items, it certainly pays to book a car rental Amsterdam Airport deal in advance. Search today for a car hire Holland deal using our cost comparison booking engine.

The official name of Amsterdam Airport is Schiphol Airport. It is located nine kilometres South West of Amsterdam City Centre. It’s the fifth busiest airport in Europe and fourteenth busiest in the world when measuring the number of passengers. It is actually the third biggest airport when just counting international traffic.

Over seventy one million  passengers used Schiphol in 2018 with only Paris, Madrid, London and Frankfurt faring better in Europe.

Amsterdam is an incredible place to visit.

Flights from Ireland to Amsterdam

If you are traveling from Ireland you can avail of direct flights from Dublin Airport and Cork Airport.

Flights from the UK

There are an abundance of airlines offering cheap flights from the United Kingdom. VLM Airlines, BMI, KLM, EasyJet, Flybe and Jet2.com all offer direct flights to Amsterdam from differing locations such as Heathrow, Gatwick, Edinburgh, Birmingham, Bristol, Liverpool, Southampton, Leeds/Bradford and more. 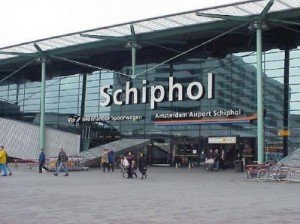 Located underneath the passenger terminal you will find the train station. As well as offering transport into Amsterdam City you can also avail of services to other cities such as Utrecht, Rotterdam, Eindhoven or The Hague. There are also bus services available from the airport.