There are six car hire Stansted Airport firms based here. London Stansted Airport is situated in Mountfitchet in the local government district of Uttlesford in Essex which is 48km northeast of Central London.

Stansted is a hub for a number of main European low-cost carriers. It is the 3rd busiest airport in the United Kingdom and also the third-largest airport serving the London region following Heathrow and Gatwick. It’s one of London’s 5 int airports, along with Luton and London City.

There is a train service located underneath the terminal building with a journey time of approximately forty five mins to London. Terravision has 2 express bus providers from the airport to London Victoria and Liverpool street. Journey time to Victoria is seventy five minutes and to Liverpool street is fifty minutes. Both services run every half hour.

Stansted Airport is situated just twenty minutes from the M25 and close to the M11 so its the perfect point of entry for those wanting to travel into Central London, Essex or to the historic town of Cambridge.

If you have made the decision to hire a car at Stansted then the world is your oyster as you can invest the morning at the seaside by Clacton-on-Sea, spend the afternoon betting at the race track at Chelmsford and still have hours left in the day time to see a show in the West end of London. 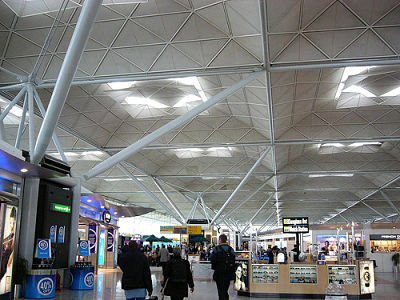 For the James Bond fans among you, you may wish to consider a Prestige car such as a Aston Martin Vantage. If there’s also a Mrs Bond then an extra driver can be added for a fee around twenty pounds plus VAT.

You may wish to consider a Gatwick Airport car rental if arriving into that part of the city plus we also offer cheap car hire Heathrow Airport deals.

From all London locations you are able to hire an environmentally friendly hybrid car such as the Toyota Prius which runs over a mixture of petrol and electric motor.

The big advantage with this automobile is the fact that if you are preparing to do a lot driving in Central London then the congestion charge is waived.

Budget are one of the businesses which supply automatic cars for disabled drivers. They are fitted with Lynx Hand Controls and other appropriate gear to assist those especially with disability.

Often people will rent a car at Stansted Airport as a cheaper alternative to using taxis but if your final destination is far away from Stansted then a one way rental may be possible. We also provide car hire Luton Airport deals.

Usually you can drop the car off at a completely different location from the place you started for a small charge.

We offer our cheap car rental UK deals all over the country. Optional extras from roof racks to kid security seats and TomTom in-car navigation devices are also generally available.