Glasgow International Airport is situated eight miles south west of Glasgow town centre near to the towns of Paisley and Renfrew.

In 2019 the airport handled almost 9 million people. It is the 2nd busiest in Scotland after Edinburgh Airport and also the 8th busiest airport within all of the UK. You can also compare car hire Edinburgh Airport prices.

It was the first airport in Scotland to manage over 1 million passengers in one month.

If you’re departing from the international airport, the primary terminals are spread over 3 floors with check in desks for domestic and international departures located on the ground floor.

The departures lounge is on the 1st floor and has a big quantity of retail outlets along with a duty free shop where you can purchase last minute products for your journey.

You will find four car hire Glasgow International firms situated in the airport terminal towards the baggage reclaim section which is within the ground floor arrivals area.

We provide quotes from hundreds of car hire UK destinations.

More than forty airlines and tour operators presently use its 2 runways flying to more than ninety destinations, and additional expansion is planned to increase annual passenger numbers to an estimated sixteen million.

There are two buildings at the airport. Terminal 2 was built in 2004 in response to the growing amounts of people. 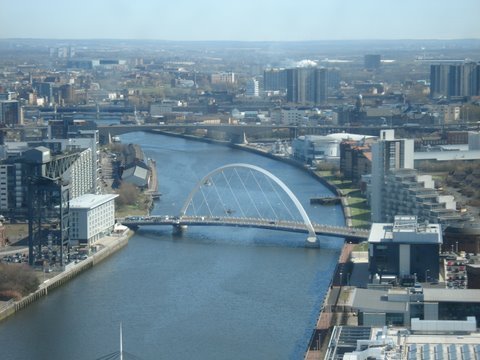 If you decide not to hire a car at Glasgow Airport then there are a few other transport options to choose from.

Should you prefer to get a taxi then the rank is located at the front of the  building close to arrivals.

Taxis are managed by Cabfly and run 24 hours a day. There’s also a great bus service from the airport which departs from the front of the terminal.

There’s no railway station at the airport, but you will find two stations within the city centre – Central and Queen Street while Gilmour Street Station is just a mile from the airport.

The population of Glasgow is known for their warmth, good humour and friendly hospitality, a fact that brings over 2 million visitors a year.

There is something in Glasgow for everybody, from its wide collection of museums and art galleries ancient and modern day to its many festivals, conference and social events held in the city throughout the year.

If there’s one thing that Glaswegians are particularly passionate for, its their football. The town is home to the biggest teams in Scotland – Rangers and Celtic.

The followers of these clubs enjoy a rivalry which has been going on now for almost one hundred and fifty years. Patrick Thistle and Queens Park are two other football clubs of note.