Have a look at our cheap car rental Bordeaux Airport rates now. We compare costs from several highly rated suppliers meaning a great value Bordeaux car hire deal for you.

There’s some stunning countryside to be explored in this part of France which may be best carried out in a Bordeaux Rental Car.

Flights to Bordeaux from Ireland

Aer Lingus provide flights from Dublin to Bordeaux or Mérignac Airport as it is also known. The airport is situated in the city of Mérignac which is a 10 kilometre drive from Bordeaux.

Bordeaux is located in the south west of France and is renowned globally for its fantastic wines. It’s divided into six districts. The central area within the town is called Les Quais. Nearby you will find the Pedestrian Centre and La Victoire which are generally full of tourists.

In the north of the town is Gambetta Square or little Paris as its occasionally known. This region contains a powerful Roman influence. The Aquitaine Bridge can be found in the city centre and is definitely a sight to behold with its stunning design.

The Roman Victory Arch located at La Victoire provides you a glimpse of Bordeaux’s Roman past. Moving back to Gambetta Square you will discover a wonderful Public Garden perfect for some relaxation time.

Gambetta Square is also the place to find high-end shops. Even though Paris is the center of the fashion world, many boutiques here offer an excellent assortment of chic couture at a lot more affordable rates than in Paris.

The nearby Botanical Gardens are a stunning location to rest following all that shopping!

Bordeaux – the capital town of Aquitaine is located on the Garonne River.

This sprawling port town is also known for its chateaux, universities, museums and town architecture which is on the UNESCO World Heritage list.

Known as the ‘City of Art and History’, Bordeaux enjoys mild winters and hot summers producing an ideal location all year-round for visitors.

You will find a lot of interesting museums in Bordeaux not least Musee d’Art Contemporain which is home to some fantastic modern art and Musee d’Aquitaine which house historical artifacts from the region.

You will find no skyscrapers or high hills in the area, and it’s simple to get around the city on foot or by bicycle.

There are also regular buses and an electric tram which serves the pedestrianized town center.

You surely wouldn’t think about going to Bordeaux and not visiting one of its vineyards?

Bordeaux creates up to 70 million gallons of wine each year. It’s considered the wine capital of the world. It makes for an excellent day trip.

The Arcachon Harbour is a great spot to hit for water sports fans with a lot of surfing opportunities available. 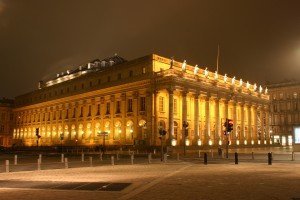 Rugby is big news in Bordeaux with the Chaban-Delmas Stadium in Bordeaux chosen as a venue for the rugby world cup in 2007.

French cuisine is of course a big deal when visiting France  The local delicacy which is only available in Bordeaux is a pastry known as cannelés.

The batter is poured by funnel into unique fluted tins prepared with beeswax after which it is cooked until deep brown and caramelized.

Book a car rental Bordeaux deal today to ensure you see as much of this amazing region as possible.

Beyond Bordeaux there are many more attractions to entice the inquisitive traveler, such as magnificent chateaus, historic towns, well-known vineyards and also the golden beaches of the Atlantic Ocean. You can also compare our car hire Biarritz Airport prices.

In the opposite direction, you could consider car rental at La Rochelle Airport.

These are all easily accessible when you hire a car at Bordeaux Airport. Our cheap car hire in France offers are hard to top.