Having a cheap car rental Lyon Airport deal waiting for you as soon as you step off the plane can be of great benefit. Our low cost Lyon car hire service finds the best prices for you in just seconds.

Just enter your dates and your preferred car hire class and start searching. We have luxury cars such as convertibles as well as standard budget and family vehicles. Find a bargain Lyon Car Hire deal today.

Lyon International Airport is located on the east side of Lyon about 20 kms from the town centre.

It was originally known as Lyon Satolas Airport but is now called Lyon-Saint Exupéry, named after the French pilot and writer.

There are only three airports in France that handle more visitors than Lyon. On average more than 7 million passengers a year use Lyon Airport.

Aer Lingus provide flights to Lyon from Dublin Airport. Flight choices for British travelers consist of a BMI flight from Manchester, a British Airways flight from Heathrow and an EasyJet flight from Edinburgh.

Many people use Lyon as a base for a Ski Holiday with Grenoble just a brief one hour plus drive away. Check out our cheap Grenoble car hire prices today.

There are lots of possible transport options to the other main towns for example Chambéry. Check out our cheap Chambery Airport car rental deals.

Having a car in Lyon means you will have no problem exploring the surrounding areas.

Lyon as a city has much to provide the average tourist. The old city is really a must see for people with an interest in French history and architecture.

Various architectural designs can be observed here such as the Basilica of Notre-Dame de Fourvière which holds the crypt of St Joseph.

The magnificent slopes of the Croix-Rousse fall inside world heritage site territory. If one cathedral is not enough for you then check out the Basilica of St-Martin-d’Ainay which dates from the 10th century.

If opera floats your boat then examine the listings at Opera Nouvel which is renowned for putting on top notch shows for many years. 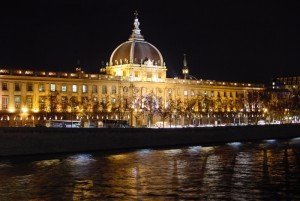 In July the Les Nuit de Fourviére performing arts festival takes place in Lyon whilst the Festival of Lights happens in December.

Rugby is a very popular sport in Lyon. The Gerland Stadium was chosen as a venue throughout the recent World Cup.