Car hire Prestwick Airport deals are always a popular choice among passengers arriving here. We provide some of the cheapest Preswick car hire offers you will find online.

Take a look at our low cost Prestwick car hire offers. You will find Avis and Budget operating car rental desks at the airport.

In terms of size,  Prestwick is Scotland’s largest airport, though in passenger traffic terms it sits in 4th position after Edinburgh, Glasgow International and Aberdeen, all of which are operated by BAA.

Passenger traffic peaked in 2008 after years of rapid growth, driven in part through the boom in no-frills airlines such as Ryanair who is Prestwick’s biggest tenant and uses the airport as a hub.

In 2009 however, there was a substantial reduction with numbers falling by almost twenty five percent from 2.4 million in 2008 to 1.8 million in 2009.

Transport to and from Prestwick Airport

If you decide not to book a car hire Prestwick Airport deal then there are plenty of other options to consider.

You will find rail, bus and taxi connections to Glasgow. Buses and trains leave every thirty mins. The train takes forty five minutes.

If you’re traveling to the west coast of Scotland by air on a budget airline like Ryanair, the chances are that you will probably be arriving at Prestwick Airport.

From Glasgow central station and from nearby Queen Street railway station, you can get trains to most areas in Scotland.

The airport bus will take you to Buchanan Street bus station in the centre of Glasgow. From here you can get buses to numerous other parts of Scotland. 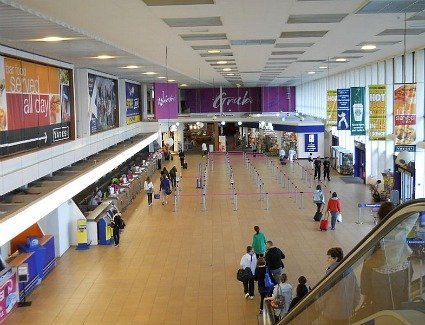 As the names of the two airports serving Glasgow are comparable, it can cause a great deal of confusion.

Frequently persons intending to fly out of Prestwick Airport have arrived at Glasgow International only to discover they are at the wrong airport.

They then have to get a taxi to drive them the 32 miles to Prestwick  with the hope of catching their flight.

The option of a one way car hire Glasgow Airport booking could be considered if such a problem arises.