Reserve a cheap car rental in Brighton deal for your next UK holiday. There’s something for everyone within the city of Brighton. Arts and entertainment are buzzing across the town from dusk until dawn. See comedy and cabaret in the Komedia or top notch bands at the Brighton Centre. When in Brighton you can enjoy world music, opera and ballet at the Brighton Dome and west end shows in the Theatre Royal. The option of leisure in Brighton and Hove is endless! With over 8 million visitors every year, including over three hundred thousand foreigners and two hundred thousand  delegates, Brighton is definitely one of Britain’s most popular tourist destinations. The town was selected among the top ten within the Observer’s Travel Awards for Greatest UK Town in the year 2000. 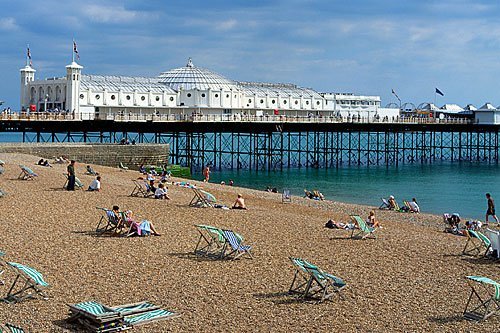 Aside from the sheer enormity of the numbers, Brighton’s tourism figures are noteworthy simply because they represent a vast array of different people such as foreign visitors and businessmen, British sightseers as well as families and couples  The town also has some of the best clubs on the south-coast as well as a fantastic live music scene which is a must for any socialite. For travelers who wish to try a different kind of seaside encounter there’s an official nudist area which has been designated on Brighton beach just south of east Kempton. Its one of the few nudist beaches within the UK that’s situated in an urban area. The eastern most part of Brighton beach boasts one of the largest marinas in Europe. Plans are afoot for the building of a high-rise hotel along with other commercial establishments. .

Since the start of the nineteenth century, Brighton has offered a wonderful sense of fun and historians attribute this towards the appetite and free spirit of the Prince Regent and later King George the 4th who came to Brighton to party throughout his time. With this attitude pervading the city, Brighton soon established itself as the leading venue for entertainment within the South Coast and a haven for parties which provided a broad array of nightclubs, dance classes, museums and cinemas. For the more wholesome visitor there’s nothing quite like a bracing walk along the prom or a stroll out to sea on the Brighton Pier to clear heads and revive appetites. On a wild and wintry day, it is an exhilarating encounter. If you’d rather ride, take the Volk’s Electric Railway, England’s oldest from Madeira Drive to Brighton Marina admiring the fine Regency terraces as you go. Eating out in Brighton and Hove is 2nd to none. With an excellent assortment of restaurants, pubs and bars, eating out in Brighton is pure gastro heaven, what ever your tastes or budget.

Consistently topping awards at the Observer Food Awards regardless of whether you’re searching for award winning cuisine, veggie treats, a tasty beachfront brunch or delicious low cost eats going out in Brighton is really a treat in itself. Brighton’s nightlife can roughly be divided into three geographical areas – the seafront, which is conveniently removed from any close neighbours and has several clubs in the old arches, the Lanes and North Laine areas where there is more variety and most clubs and bars appeal to a big audience and Kemp Town which is also really diverse but with a stronger fringe touch and feeling of bohemian abandon. Brighton has always been recognized for its laid back, relaxed vibe and the population has usually been considered welcoming and accepting for numerous decades now. The recent popularity of several gay pride events have truly boosted the city’s reputation as a gay pride mecca. In August, for instance, the massive Brighton Pride event happens. During that week, the city is flooded with gay and lesbians people from all round the world. You don’t have to be gay to enjoy this either as the event is open to all.