Hiring a car at Krakow Airport is a popular and cheap option. It offers a simple way of getting around Krakow and its surrounding regions at a small cost. There are seven car rental Krakow Airport desks. Arranging a deal can be done in just a few minutes using out booking engine. We offer some of the cheapest rates available. The official name of Krakow Airport is John Paul II International Airport. The airport is still sometimes referred to by its former name Kraków-Balice or a shortened name Kraków Airport im. Jana Paw?a II. It is located seven miles from the city of Krakow

It is Poland’s second busiest airport next to Warsaw Airport. The arrival of budget Airlines such as Ryanair has meant significant passenger growth for Krakow. In 2003 it looked as though budget airlines would not be allowed to use Krakow Airport due to a disagreement over fees however this was eventually resolved but only after work had already begun on building a new base for Ryanair near Krakow Airport. 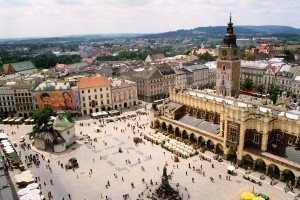 Expansion work is ongoing at the airport with a domestic terminal opened in 2007. Work is ongoing at Terminal 1 in order to cater for increased passenger numbers. The airport now annually caters for around three million passengers which is almost four times more people than in 2004.

There is certainly no shortage of flights from Ireland and the UK to Krakow. Aer Lingus fly from Dublin Airport, Ryanair offer services from Dublin, Shannon, Prestwick, Liverpool, Edinburgh, Stansted, Weeze and more while EasyJet fly from Belfast, Gatwick, Luton and more. Please visit the official airline websites for up to date info.