You will find seven car rental Wroclaw Airport desks inside the terminal. The easiest and cheapest solution is to book through our cost comparison engine on this site today. We offer rock bottom prices from many of Wroclaw’s top car hire suppliers. Renting a car in Wroclaw is cheap and simple. Wroclaw Airport is located in the south west of Poland. The official name of the airport is Copernicus Airport named in honour of the renowned Polish astronomer Miko?aja Kopernika. It can be found ten kilometers from the city of Wroclaw.

A huge amount of rebuilding work has taken place at Wroclaw Airport over the last few years. When the airport was renamed in 2005 new terminals were opened which allowed Wroclaw to cater for seven hundred and fifty thousand passengers. 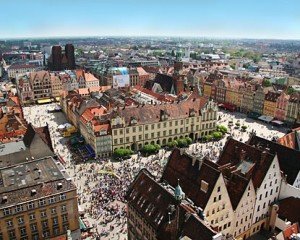 This however was not enough to cope with demands so more work was undertaken to increase the size of the terminal with passenger numbers almost hitting the one million mark. Work is ongoing at the airport with the first stage of a new plan to be finished by 2010 which will allow the airport to handle up to two million passengers.

There are bus services available into Wroclaw City from the airport which runs roughly every half hour. Tickets are less than a euro. Hiring a taxi is another available option.