Hiring a car in Zurich is simple. Compare all the best car hire Zurich Airport deals right here today. There is no need to go from website to website trying to find the best pricel. We source great value deals from all the finest Zurich car rental firms.

Zurich is the biggest city in Switzerland. Bern may be the political capital however Zurich is without doubt the cultural capital. It is also renowned for its high standard of living as well as its vast wealth. 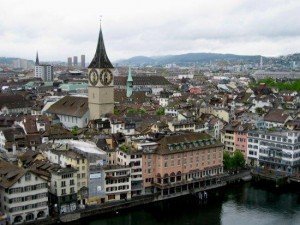 Zurich Airport is also known as Kloten Airport due to its location. It is a busy airport with plenty of international traffic. Much work was carried out on the airport in 2003 when among other things a new terminal was built. There are more plans for expansion currently in the pipeline

There are lots of options from the UK and Ireland when it comes to flying into Zurich Airport. Aer Lingus offer flights from Dublin and Gatwick, BMI fly from Edinburgh while BA fly from London Heathrow and London City Airport.

Swiss International Airlines operate over fifty flights from the airport including routes to Geneva, Dublin, Amsterdam and Heathrow. Air Berlin also offers a large number of flights from Zurich.

Many people travel to Zurich Airport during ski season due to the many excellent ski resorts which are within short driving distances.

We also offer car rental in plenty of other airports with close proximity to ski resorts. Take a look at our cheap car hire Chambery Airport offers as well as our car rental Grenoble deals.

There is a train station at the airport offering connections into the city and to other Swiss locations. In 2018 over 31 million passengers used Zurich Airport.