Turin is a fascinating city situated in the north west of Italy. For Irish people wishing to visit, Ryanair offer direct flights to Turin Airport from Dublin and Shannon.

The official name of Turin Airport is Sandro Pertini Internationalt Airport. It is situated 16 km’s from the town of Turin.

Normally around 450 flights depart from Turin every week. You can fly direct to 40 locations. 27 of these locations are international flights.

There’s also a bus service at the airport which takes about 40 minutes and costs 8 euro for a one way ticket.

Normal train services – 30 min intervals –  may also be availed of. The journey time is close to 20 mins.

There’s a taxi rank situated outside the terminal. Rates work out on average to be close to 50 euro if traveling to Turin Town.

Ski season sees a big increase in the number of passengers coming into Sandro Pertini Airport with numerous charter flights landing. More than 3 million passengers use the airport annually.

You will find plenty of ski resorts within reasonable driving distance of Turin Airport for people wishing to hit the slopes. Bardonecchia resort is about a 1 hr drive from Turin while Limone Piemonte is roughly a 90 minute drive

A car makes it very easy to travel to any of the numerous ski resorts close to Turin. One of the proudest moments in Turin’s history was hosting the Winter Olympics in 2006. Besides skiing there is plenty to do and see in Turin town itself.

Turin sits within the centre of Piedmont. The town is surrounded by the spectacular Alps. Throughout the summer months temperatures can by very warm. As with many Italian cities the architecture is fabulous.

There are some excellent shopping possibilities in Turin. There are lots of designer shops within the city too as well as plenty of local specialty shops selling hand created Italian products such as hand bags, jewellery and delicious Turin chocolate. 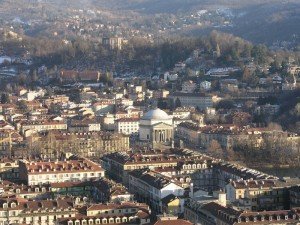 The Duomo di San Giovanni of St. John’s Cathedral dates back to the fifteenth century. The Shroud of Turin is available for viewing at the Chapel of the Holy Shroud. Many think this to be the cloth placed on Jesus of Nazareth when he was buried.

The Chiesa della Gran Madre di Dio was built within the 19th century and is believed to have been constructed over the Holy Grail.

Dining out in Turin

There are a lot of possibilities when it comes to eating out in Turin. There’s a large variety of dishes to choose from with a strong emphasis on French food.

There’s also plenty of conventional Italian fare on offer. Many people acknowledge Turin as the birthplace of bread sticks as well as solid chocolate.

Our affordable car rental in Italy deals are accessible in numerous locations all through Italy.  Grab a cheap Turin Airport car hire quote and save.