Split is a city in Croatia which offers exceptional value for money when planning a holiday.

The city is very easy to get to from Split International Airport which has the airport code SPU. It’s twenty five kilometres to the west of the city. It’s based around Trogir and is also also referred to as Resnik Airport.

It ranks 2nd among size in the country and offers capacity for more than one million passengers. The airport is constantly being enhanced so as to serve many more global destinations.

Even though it’s pretty big, it only has one terminal and one runway. Getting in and out of it could not be any simpler.

As far as regional transportation goes, there are buses and taxis constantly prepared to serve you. The buses may be identified outside the arrivals region.

As for the taxis they are parked along the taxi rank with a number of them on queue awaiting passengers to transport into the city. If you would prefer a more flexible mode of transport then check out our cheap car hire Split Airport deals.

The Diocletian Palace in Split has been listed as a UNESCO World Heritage site and some tourists may want to get a guided tour of the palace and learn more about its past.

A visit to the local museums always offers an improved comprehension of the city’s heritage.

The Archaeological Museum, made up of Roman and early Christian artifacts offers a fascinating insight into Split’s past. Those that are eager to grasp Split’s dynamic art scene can visit the Mestrovic Gallery. It’s the former residence of sculptor Ivan Mestrovic and has been turned into a gallery and now features several scarce and famous works from the artist.

Split is well-known for its thriving nightlife. Bacvice Beach has several clubs and bars. Cheap and free festivals frequently happen in Split over the course of the summer months.

Travelers seeking a more peaceful night can stroll along the promenade and have a late meal at any of the numerous seafood restaurants.

Should you have an interest in Roman heritage then you can make a short fifteen minute drive to the town of Salona. 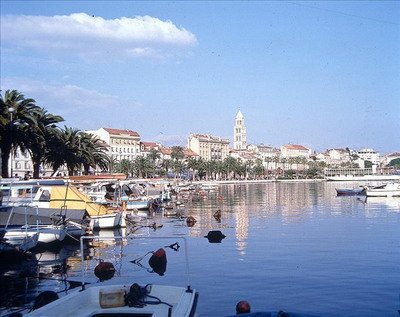 Salona has a lot of wonderfully preserved areas of past Roman daily life including a theatre, a basilica and a cemetery.

Other sites well worth viewing are St. Duje’s cathedral which is among the oldest cathedral buildings worldwide. At the cathedral bell tower you receive an amazing panoramic view of Split as well as the close by islands.

Similarly eye catching are two Egyptian sphinxes which were brought from Egypt by the Roman emperor Diocletian. Find them inside the scenic sites of Peristil Square and Jupiter’s Temple.

Nobody ought to come to this area of Croatia without viewing the stunning islands which dot the coast line. There is a ferry service from Split so why not enquire in regards to the possibility of taking your Split rental car to the islands.

Certain islands like Hvar are easily negotiated by car and are genuinely stunning. It is also possible to go to the Italian cities of Ancona and Pescara by ferry as well if you wish.