Compare cheap Seville Airport car hire deals today. Renting a car in Seville  can be easily arranged here on this website. You are able to drive from Seville to Marbella in less than three hours and Jerez is only a one hour drive away.

Should you fancy going to Portugal or arriving first in Portugal then a cheap car rental Faro Airport deal is worth looking into as it is just a two and a half hour drive.

Seville Airport and Hiring a Car

The airport in Seville is situated about ten kilometres to the North East of Seville. You will find flights accessible from Dublin to Seville Airport with Ryanair. Seville Airport may also be referred to as Sevilla Airport or its official name San Pablo Airport.

It’s the second busiest airport in Andalucia following Malaga.  You can search for a cheap car rental in Malaga should you need it. Much of the traffic to Seville is domestic with Worldwide visitors accounting for just 20%.

Passenger numbers carry on to grow with 4.3 million passengers using the airport in 2008. This represented nearly a four hundred thousand increase on 2007 too as well as a huge 2.5 million increase since 1999. 2017 has seen steady passenger numbers levels continue.

Should you choose not to hire a car then you might wish to consider a taxi which takes on average about 15 minutes to reach Seville city costing around 25 euro. There’s a bus route which runs every 30 minutes from the airport to the city. The journey takes about half an hour.

Seville is the capital town of Andalucía which is a fantastic area to discover with a rental car in Spain service.

The old quarter of the town was conquered by moors and there’s plenty of evidence within the architecture there to show it. Triana and La Macarena are two districts in this area that are really worth checking out for architectural enthusiasts. 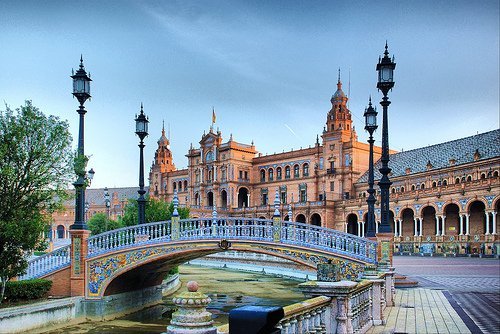 The cathedral in Seville dates back  to the 12th century and was actually originally built as a mosque. It is extensively believed to be one of the most stunning cathedrals in the world.

Attached to the cathedral is La Giralda which is the highest tower in Spain. The tower was constructed in 1914 with materials taken from aged roman buildings.

If nature and wildlife excites you then head straight for Doñana Reserve and Sierra Norte Nature Reserve. Here you will find plenty of wildlife as well as fauna and flora.

The Isla Mágica Theme Park is a good spot to bring the kids to and the Aquópolis Seville Guadalpark Water Park is also a great family day out.

The Alcázar of Seville or Royal Mudéjar Palace is a must see for any visitor to Seville. Right here you will find Casa de Pilatos which is a mansion dating back to the 16th century. The mansion is comprised of many different architectural designs including Gothic, Renaissance and Mudéjar.