Renting a car in Poland is cheap and simple here at carhirecomparison.ie. We offer excellent value car rental Poznan Airport rates. Simply select Poznan Airport as your preferred pick up point and you will see the wide variety of offers which are currently available. Poznan is one of the oldest cities in Poland with the fifth highest population. It is situated on the Warta River in the west central area of Poland.

The official name of Poznan Airport is Pozna? ?awica Airport. It was opened way back in 1913 making it one of the countries oldest airports. It is just a five kilometre drive from the centre of Poznan. 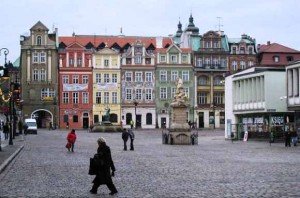 The airport is divided between an area for civilian passengers and a military section. Civilian flights are dealt with in the south section of the airport while the North section deals with military traffic. Flights arrive directly above Poznan City meaning there have been many calls over the years for airport relocation. In 2001 a new terminal was opened capable of handling one a half million passengers per year. Find a low cost rent a car Poznan deal today.

There are several options available to passengers from Ireland and the UK when it comes to visiting Poznan. Ryanair offer flights from Dublin, Liverpool, Stansted, Bristol and Edinburgh while Wizz Air offer flights from Cork, Luton and Doncaster/Sheffield. Jet Air flies to Krakow and Szczecin.

There are regular bus services available from Poznan Airport to the city centre. Journey time is around quarter of an hour.