Basel is the third major city in Switzerland. It’s located in the North East of the country. It has close borders to both France as well as Germany whose impact can certainly be spotted inside the city as well as bordering towns.

Whether it’s for business, skiing or anything else, we have got the right Basel Airport car rental deal for you. We have 7 and 9 seater people carriers as well as estates, automatics, premium car rental and of course budget and economy car hire options.

Basel Airport is known formally as Basel-Mulhouse-Freiburg Airport. It is also called EuroAirport on account of Freiburg being in Germany and Mulhouse being in France.

The airport terminal is actually used by both France and Switzerland in the exact same way despite the fact that it’s located on French territory. Consequently both French and Swiss citizens aren’t at the mercy of custom assessments.

This meant that there was what was deemed a Swiss and a French part of the airport. Switzerland joined the Schengen Treaty in March 2009 and thus the two halves are now united. The airport catered for 8.5 million passengers in 2018.

Flights from Ireland and the UK to Basel

The arrival of budget airline carriers into Basel Airport has made the location much more accessible for holidaymakers especially throughout ski season. 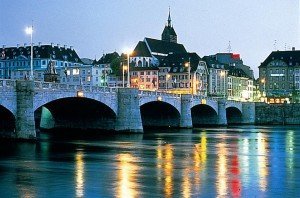 Basel is frequently top of quite a few peoples skiing holiday lists. There are some superb ski resortss in close proximity to Basel such as the Gotthard Oberalp Arena, Engelberg-Titlis, the Jungfrau Region, Heidiland and many more.

If you plan on visiting soon, don’t forget to check out our cheap car hire Basel Airport offers.