You will find 5 car rental Dinard Airport companies located at the international airport. Brittany is really a wonderful area to uncover by road. Grab a quote today by entering your travel particulars in our booking engine. There are no public transport choices from the airport. You can get a taxi which on average costs around 13 euro to Dinard and 20 euro to St Malo should you decide not to hire a car at Dinard Airport. Situated 6 kms from Dinard you’ll find St Malo Airport terminal or Dinard Airport terminal as it is also known. It is a 14 kilometre drive from the airport terminal to St Malo. Rennes is a 40 km journey.

You will find the town of Dinard on the Emerald Coast in Brittany. The town had its roots in fishing before the region began to become quite fashionable in the late 19th century when the rich started constructing luxury homes in the region. The area is really a popular seaside location particularly with the older generations. There is a casino and lots of holiday accommodation accessible. It is a peaceful relaxing town perfect for evening walks and getting in some fresh air. A stroll around any of the several distinctive towns and villages is a fantastic way of savoring the local charm. The triangular circuit of Dinard, Dinan and St. Malo is a should do on any itinerary. The architecture varies from traditional medieval, half-timbered houses to hardy but colorful thatched cottages. 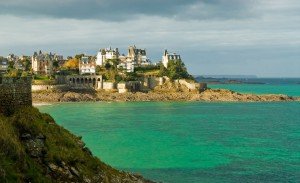 The story of the amusing ‘hybrid’ church in Dinard is an interesting one. Its conversion from Roman to Gothic was only half-completed when funds ran out in the 14th century. Walk close to the fortress walls of St Malo to become transported back towards the days from the legendary corsaires -government-sanctioned pirates who were the terror of the sea just a couple of centuries ago. In Dinan, take an early-morning stroll along the promenade, watching the sun’s very first rays strike the boats anchored within the bay, admiring the elegance of the resort popular with cross-Channel tourists since Victorian times. If you’re arriving off the ferry from any of the country’s northern ports, Brittany may be the first stop of your journey of exploration in France. Its proximity to the UK and Ireland make it perfect for families bringing their own car, but who wish to avoid interminable vehicle journeys with young kids. A word of warning to people who plan to cover everything in several days before heading elsewhere – the area has a lot to offer so choose carefully.

Find your personal unspoilt cove in some far flung corner of Brittany, from which to watch the waves dash against the rocks and the sun set on the ocean. Here is a meeting of sea, land and sky, an enchanting combination of the wild and also the picturesque. Permit your self and your family a lungful of clean ocean air, a million miles from the tension and grind of routine. Ryanair provide direct flights from London Stansted and East Midlands International airport to Dinard. Irish travelers will need to take one of these routes or possibly get a flight to Rennes if they wish to go to Dinard. Aer Lingus offer direct flights from Dublin and Cork Airport to Rennes.