Larnaca Airport is by far the most popular in Cyprus with around five and a half million passengers passing through its doors annually.

Transfer from the airport is possible by bus or taxi although we recommend organising a Larnaca rentacar service should you wish to see all that this fascinating island has to offer.

Most people arriving in Cyprus do so through the airport which is situated on the outskirts of the city. As airports go it’s small in comparison to others though the opening of a new terminal is imminent.

From the Airport most destinations inside Cyprus are no more than a 2.5 hr drive.

Cypriots drive on the left and road signs are presented in both English and Greek so negotiating the new terrain should prove relatively easy.

Cyprus isn’t known for having the best public transportation program. The country makes up for that inadequacy in public transport however by having a fantastic road network with 4 lane motorways connecting to the major cities and well-maintained routes into smaller villages and towns. 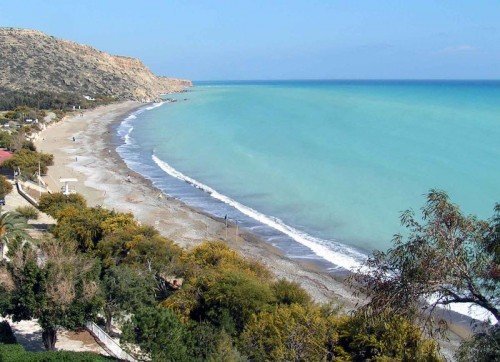 All roads are toll free and getting to well-loved towns such as Ayia Napa, Protaras or Limassol by car requires less than an hour of driving.

What to See in Cyprus

Alternatively a drive to the magical town of Paphos on the west coast with its coral reef and archaeological treasures is just ninety minutes away.

On the short five minute drive to the town, you can’t fail to be impressed by the sight of flamingos feeding on Larnaca’s salt lake and the dome of the Hala Sultan Tekke in the distance.

Hala Sultan means – Great Mother in Turkish and refers to Umm Haram who legend has it, was the reputed aunt of the Prophet Mohammad, fell from a mule, broke her neck and died.

She was buried on the site of the current Tekke and her tomb and subsequent mosque have turned out to be an essential location of worship for Muslims.

For Turkish Cypriots its importance is surpassed only by the shrines of Mecca, Medina and Al Aksa.

The Mosque and shrine overlooks the Larnaca Salt Lake that is home to flamingos and other migratory birds which stop from and to Africa during the autumn and spring.

The lake fills with winter rains and gradually dries up as summer time approaches, leaving a fine film of salt. In the middle ages salt mining was carried out here but pollution from aircraft exhausts in modern day times has rendered the salt commercially useless.

Legend has it that Larnaca was established by one of Noah’s grandsons in the thirteenth century.

Current day Larnaca is constructed over the original site of Ancient Kition and some of the ruins of the ancient city can be found at Leontiou Machaira close to the Archaeological Museum.

Legend has it that Jesus raised Lazarus, the brother of Mary and Martha from the dead. Instantly following this, Lazarus was expelled from Jerusalem by the Jews, and came to Larnaca where he was ordained as a bishop by St. Barnabas.

Lazarus brought Christianity to Cyprus and remained a bishop for thirty years. Following his death he was buried where the current church stands.

His relics didn’t remain entombed for long. Subsequent of their discovery in 890 they were transported to Constantinople and in 1204 moved to Marseille.

Larnaca Fort is situated by the water’s edge and separates Finikoudes, Larnaca’s promenade and also the old Turkish quarter.

The fort dates from 1625 and was constructed by the Turks to defend the town. It was used more often as a prison, especially when the island was under British control.

Climbing up the walls provides good views of the sea. The fort is on the seashore and visitors can walk around the sea wall.