We provide a low cost car rental Tangier Airport service. Tangier Airport is known officially as Tangier Ibn Battouta Airport. It can be found eleven kilometres from the city. The airport has grown steadily in stature over the years with annual passenger numbers of over six hundred thousand. Hiring a car in Morocco may be something worth considering.

A visit to the city of Tangiers hits you with a strong sense of intoxication, a feeling that draws you towards its imperial history. Tangiers has undergone a radical makeover from its Phoenician past. From tales of Hercules to the martyrdom stories of Saint Marcellus and also the legendary espionage activities from the previous century, the excitement around this location is palpable. A hub of multicultural activity, Tangiers is home to communities as diverse as Muslim, Christian and Jewish. As a port and a gateway towards the Mediterranean, the location has experienced rapid economic growth over the past few decades. Tangiers has been a trade centre for the Europeans and Americans, who have had a big role to play in its growth. 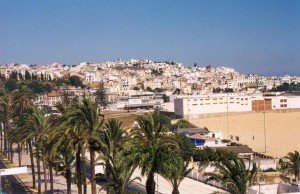 Among the oldest cities of Morocco, Tangiers is encompassed by the Mediterranean Sea and also the Atlantic Ocean. The town offers tourists the opportunity to experience an offbeat holiday. For tourists, a promenade along the Beach Walk is really a excellent way to spend a lazy afternoon. As you travel westwards, you would discover a number of other beaches set amidst picturesque mountains along the Atlantic coastline. The Medina in Tangiers is also one of the destinations frequented by tourists. A hub of commercial activity, this place is fascinating for its narrow streets, distinctively styled houses with decorated doors and gates, and handcraft.

Connected towards the Beach Walk, the entrance to the Medina is visually appealing and is the most interesting location of old Tangier. As you walk down the narrow streets, you will find yourself at the Petit Socco – the center of all illegal activity in Tangiers. The Kasbah Location is an additional tourist attraction in Tangiers. You can visit the museum right here, which was once a Sultanate Palace. The Kasbah was one of the most appealing tourist areas prior to when the new establishments in Tangiers began to draw visitors. Nevertheless, people still continue to visit this place for its mysterious air.

Established by Moulay Ismail, a Moroccan Sultan, the Dar El Makhzen is among the most visually attractive locations in Tangiers. Replete with wooden roofs, marble fountains and two opulent courtyards, the Dar El Makhzen is really a museum of art. Vacationers can view the oldest works of architecture and fine craftsmanship in this place. For a more modern feel, tourists can go to the Place de France that has some of the finest cafes in Tangiers.