Consider our car rental Tampere Airport service when visiting Finland. The official name of the airport is Tampere Pirkkala Airport. It is situated thirteen kilometres from the city and is Finlands 3rd busiest airport. Our prices offer exceptional value.

Tampere is the 3rd biggest town in Finland and also the largest inland centre within the Nordic countries. Currently you will find more than two hundred thousand inhabitants in Tampere, and almost three hundred thousand inhabitants in Tampere Sub-Region, which comprises Tampere and its neighbouring municipalities. Tampere’s population density is three hundred and ninety per square kilometre. Tampere is one of the 3 most rapidly developing regions in Finland.

In 2004, the Town of Tampere came first in an image survey comparing the largest cities in Finland. It was also the most attractive city among Finns who plan on moving. Tampere’s town centre is surrounded by lake and ridge scenery, sited on an isthmus between lakes Pyhäjärvi and Näsijärvi. The Tammerkoski rapids run via the city. Pyynikki, which was formed by the action of ice and sea as long as ten thousand years ago, is the world’s highest gravel ridge. At its highest it rises eighty metres above Lake Pyhäjärvi and one hundred and sixty metres above sea level.

Pyynikki park – There are two hundred lakes and ponds in Tampere, and a total of four hundred and fifty within the whole region. Twenty four per cent of Tampere’s surface area is water and seventy six per cent land. Eighteen and a half per cent of the land has a town plan. You will find numerous nature reserves in Tampere. Pyynikki and Viikinsaari near the city centre are the best recognized of them. Parks and green areas amount to two thousand, four hundred hectares, approximately one hundred square metres per inhabitant. The town also has 4 allotment areas. The Hatanpää allotment, established in 1916, was among the first in Finland. 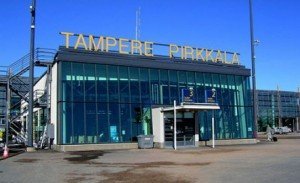 The City of Tampere finds it essential that all residents of Tampere, regardless of their mother language, can benefit from the same services. There are more than two hundred thousand residents in Tampere, of which some six thousand are foreign nationals. When the neighbouring municipalities are included, the number is over seven thousand. All in all, Tampere has residents from over one hundred and twenty five countries. The biggest groups of foreign nationals within the EU originate from Estonia, Sweden, Germany and Great Britain; outside the EU the biggest groups come from Russia, Iraq, Afghanistan, China and India.