The car rental Friedrichshafen Airport desks are situated at the P2 parking lot.  There are fives desks in total. Search for a cheap deal today. We offer excellent deals during ski season as well as all year round. Friedrichshafen can be found in the state of Baden-Württemberg. The city suffered extensive damage in the 2nd world war so has a modern look due to the rebuilding process. It is a pretty city offering some excellent views of the Alps and neighboring countries such as Switzerland and Austria.

Friedrichshafen Airport is situated just under two miles from the city. It is a small but busy airport particularly during ski season averaging more than half a million passengers per year. It is sometimes referred to as Bodensee Airport. 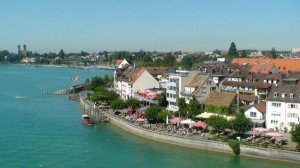 Ryanair offer flights from Friedrichshafen to Stansted and Alicante. Hamburg International Airlines fly to many sunshine holiday destinations such as Fuerteventura, Tenerife-South, Rhodes, Majorca and more.  InterSky offer flights to Berlin Tegel, Graz, Nice  Olbia and more while other airlines such as Air Berlin, Austrian Airlines, Iceland Express and Lufthansa also offer regular flights. Please see their official sites for up to the minute details.

One of the major reasons why many people visit Friedrichshafen is of course due to the superb ski resorts close by to the area.  Resorts such as Ischg, St. Anton, Davos – Klosters and Livigno are major draws. Some other ski resorts worth considering include St Moritz, LAAX, Graubünden and Damüls.

There are three excellent museums worth visiting in the city. The most well known is the Zeppelin Museum which features an incredible full size recreation of the Hindenburg Airship. The Schlosskirche and Schulmuseum are also worth a visit.